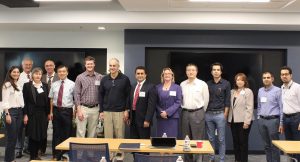 On Friday, April 5th, the Fluid-Structure Interaction Lab (FSI Lab) hosted the AFRL-FIU symposium about Physics of Evolutionary Design in Aerospace Systems. Organized by MME assistant professor and director of the FSI Lab, Dr. Pezhman Mardanpour, the event brought together researchers from around the country working at the forefront of aerospace systems design with the objective of discussing the physics of evolutionary design and future large-scale trends in air vehicle development.

Dean John Volakis and Associate Dean Osama Mohammed kicked off the morning as they welcomed guests to the beautiful Modesto Madique campus. Following the opening remarks, Senior Research Aerospace Engineer and Team Lead for Design of Aerospace Systems for Hypersonics at the U.S. Air Force Research Laboratory (AFRL), Dr. Jose Camberos, shared an overview of the work being done in the national laboratory and the possibilities for collaboration with FIU in the future. Dr. Camberos is currently focused on developing critical technology to meet advanced systems requirements in the area of hypersonic aerospace vehicles. 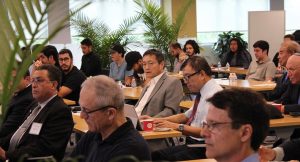 The audience then welcomed Dr. Adrian Bejan, renown Jones Professor of Mechanical Engineering at Duke University, who spoke about the “Evolution of Air Transport”. Dr. Bejan is the author of 30 books, including his most recent titled “The Physics of Life: The Evolution of Everything” and over 650 peer-referred articles. He is also the recipient of the 2018 Benjamin Franklin Medal, which recognizes outstanding accomplishments in science and technology.

He is credited for “pioneering interdisciplinary contributions in thermodynamics and convection heat transfer that have improved the performance of engineering systems.” (https://www.fi.edu/laureates/adrian-bejan)

Shortly after, Dr. Jose Lage, Professor of Mechanical Engineering at the Lyle School of Engineering at Southern Methodist University, shared an overview of the National Science Foundation Thermal Transport Processes (NSF TTP) Program and the role constructal research can play alongside it. The TTP program supports “engineering research projects that provide a foundation for new discoveries in thermal transport phenomena as well as combine existing knowledge in thermodynamics, fluid mechanics, and heat and mass transfer to probe new areas of innovation”.

Dr. Lage’s presentation was then followed by Mr. Jordan Charles, director of the New Glenn Integrated Supply Chain Execution at Blue Origin. Blue Origin is an aerospace manufacturer and spaceflight services company with the goal of building reusable launch vehicles. Mr. Charles presentation focused on the evolution of airplanes and rockets through an understanding of the past and predicament of the future.

Following a lunch break, Dr. Mardanpour took the stage to speak about his research on the constructal design of flying wing aircraft. This collaborative work between Dr. Mardanpour, Dr. Bejan and other distinguished faculty and graduate students, is “based on the constructal law and the principle that a design that avoids stress strangulations provides better access to the flows that inhabit the system.” This fundamental research was recently published in the American Institute of Aeronautics and Astronautics (AIAA) Journal as well as presented and very well received at the 2019 Second Law and Constructal Law Conference at Porto Alegre in Brazil.

As the afternoon progressed, Dr. Marija Ilic presented her research titled “Modeling of Energy/Power Flow Dynamics for Control in Complex Multi-physics Systems”. She is currently a visiting professor and senior research scientist at the new MIT Institute for Data, Systems, and Society. Dr. Ilic is also a professor at Carnegie Mellon University, with a joint appointment in the Electrical and Computer Engineering and Engineering and Public Policy Departments. She is interested in large-scale electric power systems and transforming today’s electric power grid.

Throughout the symposium, various faculty members from the University of Miami (UM), shared their work. Dr. Victoria Coverstone, professor and chair of the Mechanical and Aerospace Engineering at the UM, presented her work on the advances taking place at UM with regards to space mission design and technology. She is the first woman to chair any department in the College of Engineering at UM. Dr. GeCheng Zha, Mechanical and Aerospace Engineering professor and director of Aerodynamics and Computational Fluid Dynamics Lab at UM, also presented his research titled “A Perspective of Physics-based Aircraft Design Evolution from Subsonic to Supersonic Speed”. In addition, Dr. Sakhrat Khizroe, a professor in the Electrical and Computer Engineering at UM, presented his work titled “Multi-functional Nano Transducers to Understand the Principles of Neuromorphic Computing”.

As the symposium came to close to end, Dr. George Dulikravich, tenured Full Professor in the MME department at FIU, presented his work titled “Multi-objective Design Optimization of Aerodynamics, Materials, and Cooling of Hypersonic Vehicles”.  Dr. Dulikravich has a background in mechanical and aerospace engineering and applied mathematics with multidisciplinary interests.

Congratulations to Dr. Mardanpour and the entire FSI lab for hosting such an informative and successful symposium!