On Wednesday May 1st, the Department of Mechanical and Materials Engineering (MME) bid farewell to over 100 graduating students during the Spring 2019 commencement ceremony. Families and friends of graduates gathered at the Ocean Bank Convocation Center at the Modesto Maidique Campus to celebrate this huge milestone in the life of these accomplished individuals. “You are looking at the next generation of our country’s and our community’s engineers…” said University President, Mark B. Rosenberg, as he addressed the Class of 2019. The ceremony began by acknowledging students receiving master’s degrees within the College of Engineering and Computing. Within the MME department, Jorge Del Risco received his Master of Science in Materials Science and Engineering and Erick Camacho, Joseph Coverston, Amijai Fleischman, Izak Negron, and Shanae Powell received their Master of Science in Mechanical Engineering.

The recognition of distinguished students did not stop there. For the first time in history, FIU recognized nine female graduates from the College of Engineering and Computing who embody what it means to be “Worlds Ahead”.  These graduates were nominated by faculty members and exhibited outstanding perseverance, intelligence, and personal strength during their time at FIU. Of the nine outstanding women recognized, Rossana Zotti, Gabriela Gutierrez Duran, and Ariana Bueno represented the MME department.

Ms. Zotti is a mechanical engineering student who is credited for her novel hospital patient transfer system that allows one nurse to move a patient from one bed to another, regardless of the patient’s weight. Throughout her time at FIU she has served in various roles ranging from overseeing the Society of Women Engineers where she proudly served as the President to serve as a teacher assistant for various labs. This summer she is headed to Massachusetts, where she will work as a research and development engineer at Boston Scientific.

This summer Ms. Duran has accepted a full-time offer at Boeing, following a summer internship, where she will pursue her lifelong dream of entering the aerospace industry. Since a young age, Duran had been fascinated with all things aero which pushed her to join the Aerospace Engineering Club during her time as an undergraduate. She was involved in various projects which ultimately prepared her for this amazing opportunity at Boeing.

Arianna Bueno is a superstar within the MME department where she has excelled not only in the classroom but outside as well. In addition to her mechanical engineering studies, she pursued her passion for physics by double majoring. She worked as a learning assistant for the Physics department for six semesters while balancing her roles as president of the Society of Professional Hispanic Engineers and vice president of the Society for Women Engineers. Throughout her time as an undergraduate, she has obtained internships at Boeing and Lockheed Martin which have directly impacted her dream of becoming an astronaut.

After the recognition of the Spring 2019 Worlds Ahead graduates, which were also referred to as the “fine nine”, all graduates began to individually approach the stage to receive their diplomas. Applauses and cheers filled the Convocation Center as friends and families watched the graduates walk the stage. The energy that filled this 5,000-seat arena was unmatched.

As the graduation came to an end, students headed to the Graham Center Ballrooms where the Induction to the Profession Ceremony took place. Dr. Michael Christie, a senior lecturer for the Biomedical Engineering department, welcomed all students and guests to the ceremony. His remarks were followed by a welcome speech by Dean John Volakis, who also had the honor of introducing the keynote speaker, Dr. Tariq King. Dr. King is currently the Head of Quality at Ultimate Software and has over fifteen years of experience in software testing research and practice. Throughout his keynote address, King spoke about the direct impacts his life experiences had in shaping him into the successful computer scientist he is today. This was followed by the long-awaited “Order of the Engineer” ceremony. Over 30 mechanical engineering students were inducted into the profession and each were given a steel ring to be worn on the smallest finger to serve as a constant reminder of the engineer’s oath.  As the ceremony came to a close, each department recognized outstanding students within the department. Kumar Shah received the Outstanding Bachelor’s Degree award on behalf of the mechanical engineering department for his dedication not only to his studies but to inspire the next generation of STEM leaders in the Miami Dade community.

Congratulations to all the Spring 2019 graduates! We wish you all the best in your future endeavors and hope you will continue to make FIU proud! 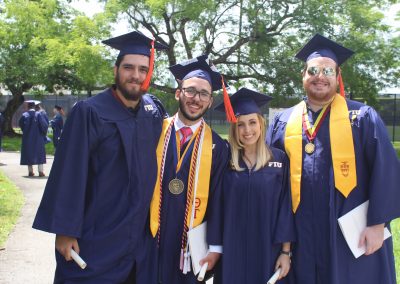 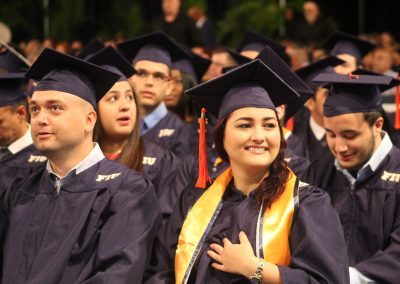